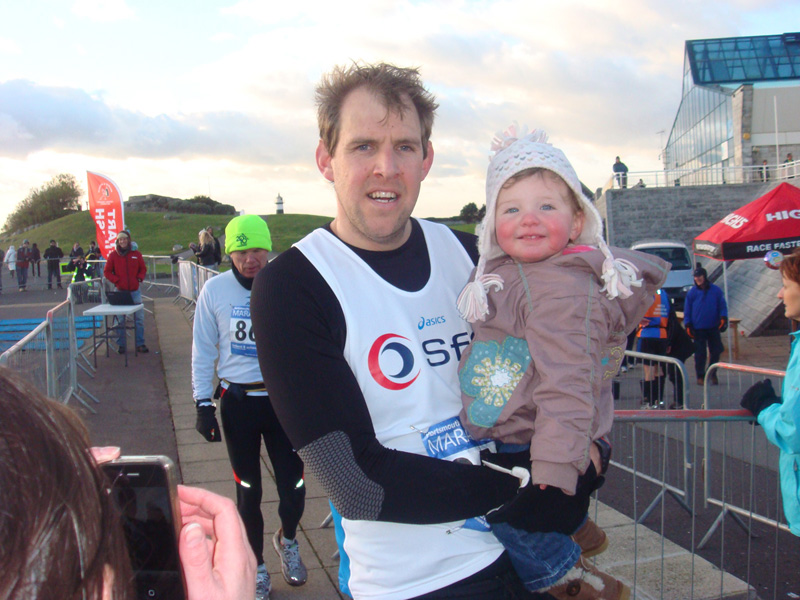 On 18 December 2011 Craig Fuller, SFS Administrator, completed his twelfth and final marathon in 4 hrs 35 minutes, 12 months after commencing his challenge in January 2011 to run a marathon every month.

Huge congratulations to Craig who managed to run some 315 miles and raise over £5,500 for the Meningitis Trust and Northampton General Hospital Intensive Care Unit where his wife Katie was treated after being diagnosed with Meningeoncephalitis in 2008.

Thankfully Katie made a full recovery and the couple, together with 1 year old daughter Poppy, have just welcomed a new addition to their family, William John George Fuller who was born on 26th January.

Of all the races, Craig rates Snowdonia as his best race and the Malvern Hills as his worst.  Since crossing the final finish line, which Craig described as a very emotional experience, he threw his trainers in the garage and hasn’t done any training since.

Craig adds: “Thanks to everyone who has supported me. It was an amazing experience.  I wasn’t sure that I could actually achieve what I set out to do so I’m surprised, proud and massively relieved that it’s over!”

To find out more about Craig’s challenge go to www.run12in12.co.uk

Anyone wishing to donate to one of Craig’s chosen charities can still do so by emailing Craig at [email protected].

Specialist Fleet Services (SFS), provides vehicle contract hire and fleet management solutions to the public and private sector. From grounds maintenance equipment and passenger transport, to road sweepers and refuse vehicles, SFS has the skills and expertise to source, maintain and dispose of any vehicle. SFS also operates workshops on behalf of local authorities.